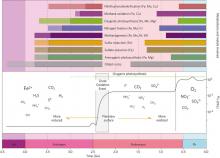 Abstract:
Life is based on energy gained by electron-transfer processes; these processes rely on oxidoreductase enzymes, which often contain transition metals in their structures. The availability of different metals and substrates has changed over the course of Earth's history as a result of secular changes in redox conditions, particularly global oxygenation. New metabolic pathways using different transition metals co-evolved alongside changing redox conditions. Sulfur reduction, sulfate reduction, methanogenesis and anoxygenic photosynthesis appeared between about 3.8 and 3.4 billion years ago. The oxidoreductases responsible for these metabolisms incorporated metals that were readily available in Archaean oceans, chiefly iron and iron–sulfur clusters. Oxygenic photosynthesis appeared between 3.2 and 2.5 billion years ago, as did methane oxidation, nitrogen fixation, nitrification and denitrification. These metabolisms rely on an expanded range of transition metals presumably made available by the build-up of molecular oxygen in soil crusts and marine microbial mats. The appropriation of copper in enzymes before the Great Oxidation Event is particularly important, as copper is key to nitrogen and methane cycling and was later incorporated into numerous aerobic metabolisms. We find that the diversity of metals used in oxidoreductases has increased through time, suggesting that surface redox potential and metal incorporation influenced the evolution of metabolism, biological electron transfer and microbial ecology.